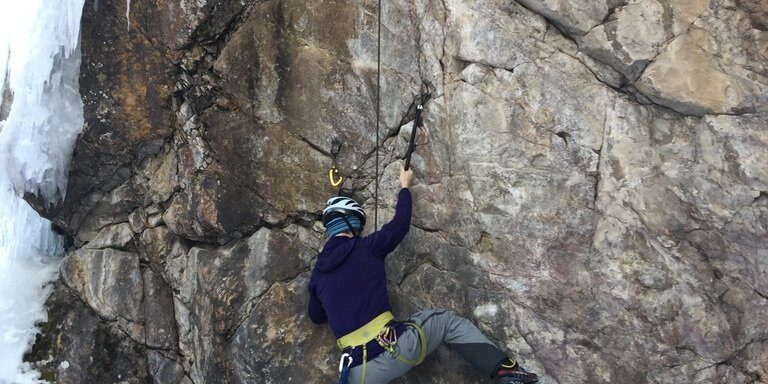 Let’s face it, dry tooling by its essence is weird. You’re scratching around on rock with sharp, hook shaped claws on your hands and feet, and for your hands they’re on the end of sticks giving you significant extra reach. Make no mistakes, this is aid climbing pure and simple, albeit a much more physical and athletic version of it. For some, it is a sport unto its own; a means to its own end. The movement is much like rock climbing, but your finger and grip strength are not a limiting factor. Of course, climbing ice with this stuff makes perfect sense: you’d be hard pressed to go anywhere on any tilted ice surface without these tools. Try simply walking up a frozen stream bed in rock climbing shoes! But for climbing completely dry walls that would otherwise be the realm of rock climbing it can seem confusing and mystifying at the same time. Falls are often surprising, coming completely unexpected from a momentary slip. You have virtually no idea what the hold you’re hanging from or standing on is actually like since you’re not really touching it. However you view dry tooling by itself, one thing for sure is that it was born of and still has a lot of transfer to alpine climbing.

By its very nature, most any true alpine climb will involve some if not a predominance of climbing that requires using at least crampons and likely one or two ice axes, as well. Even sections that have mostly dry rock often start or end on snow and ice ledges. Sure, you can change into rock climbing shoes and use a chalk bag on very technical climbs and on routes that are exclusively rock climbing (e.g. Fitzroy), but most high mountains require you to be climbing in crampons and with axes for most if not all of the time. Climbing the snow and ice portions are typically pretty straightforward and a lot of classic alpine routes of large faces simply link one ice/snow line to another. However, it is the spaces in between, on the dry rock, where the cruxes often occur. A good alpinist should feel equally at home climbing rock with crampons and axes, regardless of whether it has any ice or snow on it at all. Lacking much snow or ice, these sections can feel extremely insecure and intimidating to ascend with ice climbing equipment. It often takes a long time to lead and clean these pitches, with the hopes that the relative ease of ice and snow climbing will help make up for this. Rock climbing is a great way to improve overall vertical movement skills as well as gain fluency with the technical systems, but it in and of itself does not necessarily prepare oneself for how to move in similar terrain with stiff high top boots and crampons instead of soft, sticky rock shoes, and using ice axes instead of chalked finger that can feel every little nuance of the holds. There simply is no substitute for preparing for real alpine mixed climbing than just going dry tooling.

There are highly specialized axes, boot and crampons for just dry tooling and this equipment is different from what is commonly used in the high mountains, but much of the movement patterns and skills are the same and there is a lot of transfer. Spending some time on completely dry rock (where appropriate-probably not a good idea at your local rock climbing crag) with axes and crampons will help you develop the knowledge and skill involved in moving efficiently in this element. Also it can help you to better read and analyze the terrain and find the most energy efficient path and direction. No, learning how to do a figure-four out a steep roof will not really help you alpine climb, but scratching up dry slabs and vertical terrain will have a lot of good transfer. Doing so with modern equipment meant for dry tooling will make this easier to learn and then, later on, using the actual equipment you intend to use in the mountains will feel much more comfortable. I found that a combination of winter dry tooling, mixed and ice climbing with plenty of ski touring worked very well for me to prepare for many alpine climbing adventures. The skiing helped me build and maintain my mountain, uphill fitness and the dry tooling and ice kept my alpine climbing skills sharp and in focus for spring and summer alpine climbs. Certainly all of this was built upon a solid foundation of general mountaineering and rock climbing, but for me, I found winter to be the time to get out and get scratchy as often as I could. These skills had a huge impact on my personal alpine climbing successes over the years.

In addition to our other alpine specific climbing courses and guided climbs, Skyward Mountaineering offers a three-day Ice and Mixed Climbing Workshop that specifically targets the skills involved in modern mixed climbing skills. Our newly revamped curriculum curated by Steve House and me, Vince Anderson, includes state of the art techniques for mastering what some call the “dark arts”: dry tooling. We use a combination of both indoor (at Ouray’s unique indoor dry tooling facility) and practical outdoor climbing opportunities to help you get the most out of your time to learn and have fun. We would love the opportunity to assist you in your journey towards becoming a better alpinist and winter climber. Please consider treating yourself or someone you climb with to this chance to learn from our team of seasoned experts in the Dark Arts.